Keeping Up With the Traditions 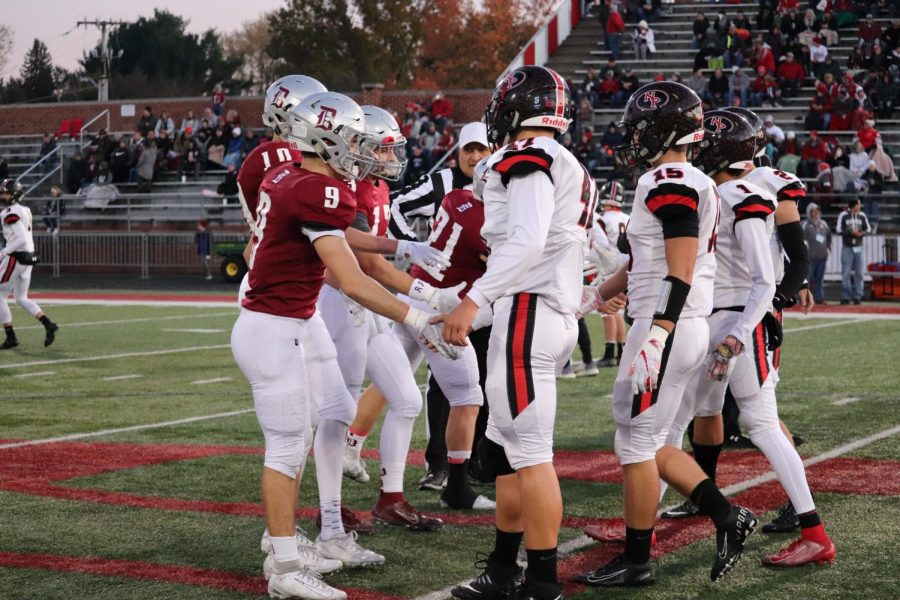 Keeping Up With the Traditions

Every year we as Dover students have that one week in the school year where throughout the week we dress in crazy outfits and continue traditions that have gone through Dover history for decades. This week is called “Dover-Phila Week”.  There have been traditions that still happen today, but also some that have been retired from the past. So let’s have a look at the Dover-Phila rivalry traditions that have come and gone over the years..
Let’s start with the bonfire. On the Thursday of Dover-Phila week, we have the city pep rally at the stadium before Friday’s game. After the pep rally, everyone leaves the stadium to stand in the field to watch the seniors light the bonfire that they built that day. In the past, the band used to march around the bonfire as it was much smaller than it is nowadays! Currently, the band tradition is to complete a death march to the stadium for the pep rally and bonfire; however, for obvious safety reasons, the band does not march around the bonfire now. This year, specifically, the 2021 seniors will build and light the bonfire as a class on Thursday during the school day because of the COVID pandemic. As a member of the senior class, I am so thankful we are able to continue with this fun tradition at our school.
We have more traditions that we still do today like the sportsmanship banquet and the spaghetti dinner. The sportsmanship dinner was originally called the “Dutch Furbay Dinner,” and it was held at a church in either Dover or Phila on Monday night to begin the week of festivities. It is for all of Dover and Phila senior football players, cheerleaders, and other seniors that are involved with the game. This banquet has now been changed to a breakfast on Saturday morning before the week begins at The Buckeye Career Center. At this breakfast, there are speakers who talk about the tradition and rivalry and about good sportsmanship. Next, I’d like to recognize the spaghetti dinner which is still held just before the pep rally and bonfire. This allows the team and community members to share dinner before the big game! It is always such a tasty and fun experience, so I highly recommend going to that at least once while living in Dover.
“The Bat” is probably one of the most unknown but special traditions we have. Just like the name, it is a literal baseball bat that is passed between each school to whoever wins the game. The winning school keeps it in their sports case to show off the big win! After each game, the score is engraved into the bat to create a record of the score of the games from every year. The original bat was filled up, so now there is a second bat that is used also. Each year both teams play their hearts out to “bring home the bat” for their home school.
Personally, I think these next two traditions are the most original and special to Dover even though these aren’t done anymore. They are known as the casket and the snake dance. Starting with the casket at the football game, multiple Dover boys would dress in black clothes and top hats and walk across the track to the Phila student section with a casket. In this casket would be tons of toy ducks that are “dead” or tied with ropes. This tradition always ended with a ruckus between the Dover boys and the Phila section, and the police would just automatically stand with the boys and the casket waiting for a fight to start. This tradition was during the 1950s-1960s. The snake dance took place on Thursday night as a way of transporting students from the spaghetti dinner to the bonfire. Students would link arms and move in a line as a snake would all the way from the school to the stadium. They would weave throughout the stores downtown and the roads of Dover. This tradition ended because there were too many students getting injuries and sadly, theft and damages from the stores’ students passed through. To say the least, students took this event very seriously.
I’d like to mention two more traditions we have at Dover. The first is known as Mr. Tom Armstrong’s poem, which was a poem about the game and mentioned each seniors. Mr. Armstrong was a former student and passionate Dover fan. The poem was presented before each game.  Today, the tradition continues with Mr. Shankle writes and presents a poem about the football players at the school’s pep rally. The final tradition most high schoolers know and love is the Dover-Phila hall decorating. Many of you probably know this one, but each grade competes by decorating a portion of the building with a theme about Dover-Phila week, and this tradition continues in the new building but without the competition – just for fun now! But as a senior, I’d say we automatically win, but I could be biased! We are so blessed and thankful to keep this tradition and many others going with our beautiful new Dover High.
Thank you for tuning in to my information article about this historical week in our school’s history. I would like to offer a special thank you to Doug Willoughby, who provided much of the information in this article. He is a true Tornado at heart! Have fun this week, and beat the team across the river! Go, Dover!!