I Miss The Old High School; Here’s Why 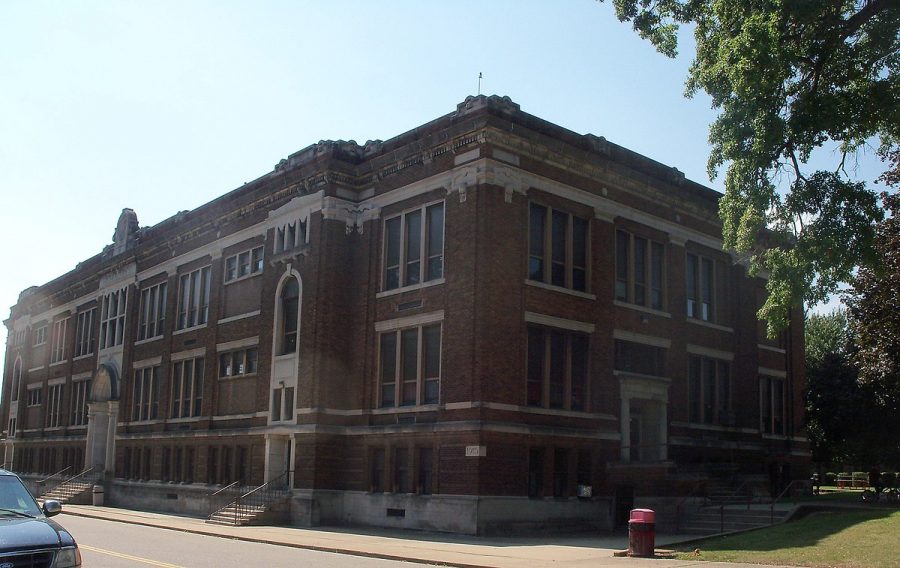 As a DHS senior, I am grateful for the opportunity to experience both the old and new buildings. It was an honor to walk the same halls as every Dover graduate from 1915 on. Between the old architecture, falling ceiling tiles, and murals throughout the building, it was obvious that our school was not only well-used but well-loved. The old building carried the artifacts of the thousands of students that had left their mark whether that be with an All-Ohio picture in the gym lobby, a painted brick in the art room, or graffiti on a bathroom stall. Dover has always stressed the importance of tradition, and I think I speak for most of my classmates when I say we could all feel the tradition and excellence of the students and staff that came before us when we stepped into that building. Personally, that building has stuck with me. I miss it. I miss the feeling of that building. I can’t even pinpoint what that feeling was, but all I can say is that it felt familiar and warm. It felt like home.
Obviously my experience differs from my peers’, so I posted a poll on my Instagram to gather opinions on how my fellow students felt about the old school. Some commented on the cockroaches and musty smells of the building which I must say definitely contrast with the clean and insect-free building we enjoy today. But many felt the same way I did: fortunate to have a brand new school but sad to see the old school gone. The responses praised the tradition, the character, and the history of the building as well as more personal connections such as the memories made there and nostalgic feelings. Some responded to the poll saying that the old high school was “intimate” “warm” and “personal” when compared to the new building. One commented on the fact that the old building had many murals and artwork along with picture frames and bulletin boards decorating its walls. In contrast, some said that the new building seems impersonal since we haven’t spent that much time in it and it lacks personal touches.
Although the Tornado spirit lives on in our new building, I think we can all agree that the old school had a special character and flair that we all keep alive in our memories. Sometimes when I think about the old school I swear it was a living, breathing being. That’s how special it was. I hope that everyone in the class of 2021 cherishes their time in the old building as much as I do. And I hope that the future classes to walk through the halls of the new building establish a positive and lively atmosphere. I hope that as time goes on that the new building will begin to feel more like Dover and not like some fancy alternate universe that’s cool but just not familiar to us. I hope that the future classes will really leave their mark on the school, creating a Crimson Culture that is unique to Dover and the tradition and excellence our school embodies. I urge the future classes to make the new building feel like home and to make it feel like as much of a living, breathing being as the old building.
So many of us loved the old building for all of its quirks and oddities. It didn’t matter that it was quite literally falling apart. It didn’t matter that all of the classrooms looked different or that the floor plan got a little weird when they added on to the building in the 40s. It didn’t matter that there were a bunch of hidden tunnels and seemingly secret passageways–actually, those were pretty cool and creepy if you had a study hall handy for exploring. It didn’t matter that there were cockroaches on the staircases and in the corners and in the bathrooms, not to mention how unnaturally scented some of the bathrooms were. It didn’t matter that the auditorium was rumored to be haunted. It didn’t even matter that the rumors about the creepy little bat skeletons in the vents in the auditorium turned out to be true (this is something I’ll never forget or get over). The point is that very few schools could brag about having all of those things under one roof, and in the end, it connected us all. In the end, it was our building.
So in short, I miss the old school because it was home. The physical building isn’t all I miss. It’s a culmination of that and how it felt to be a Tornado under that old, old roof. Especially for us seniors, that building served us well. We spent many Fridays in our crimson and grey. We dressed according to themes during spirit week. We enjoyed assemblies in the old gym, and we especially enjoyed cheering on the basketball teams under the Kaenel’s Krazies sign in the gym. Finally, we spent countless hours with amazing teachers and awesome friends in that building, and for that I’m forever grateful.
I’ll miss starting out my day at choir in the basement basement, trudging up to the third floor for geometry with D’egidio, having fun in algebra with Mr. Ayers, saying “hola” to Mrs. Beadle in the hallway with the chile pepper painting on the wall, and trying to uncover the legendary swimming pool with my friends. If you’re truly a DHS senior, you’ll know exactly what I’m talking about.