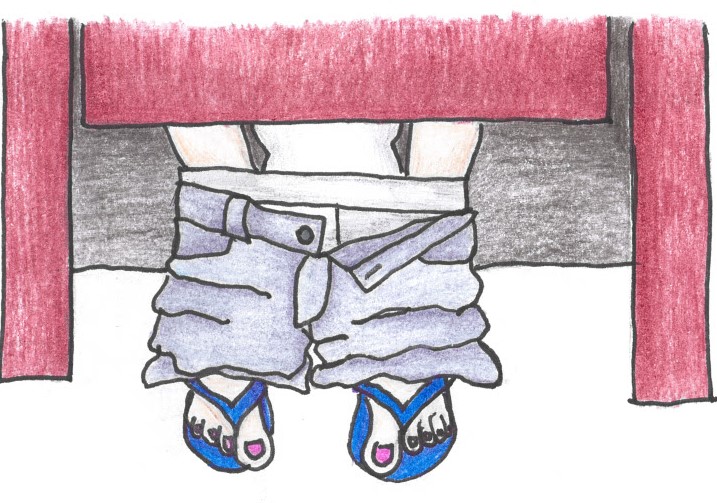 The Pee Shy Epidemic: How this restroom crisis is affecting the students of Dover High

Over the last four years, students of Dover High, as well as teenagers nationwide, have been gravely impacted by a particular pandemic. You’ve guessed it. The pee shy epidemic has taken America by storm. For those lucky enough to beg the question, “What is the pee shy epidemic?”, the only true way to understand is through experience itself. Picture this, the time is 12:15 – right after lunch – and you just drank 32 ounces of water in preparation for your big game later tonight. You run to the bathroom, desperate to relieve yourself before it is too late. There are three other people in the stalls (or urinals) next to you. Not one sound is made for the entirety of your restroom experience. You still need to urinate worse than ever before, but nothing is coming out. You feel your hands getting clammy and notice a certain anxiety washing over you as the peeing standoff has just begun. And you, my friend, are now a victim of the pee shy crisis.

In the medical world, there is a formal name for someone who is suffering from chronic pee shyness: paruresis. How did paruresis find its way into everyday American culture? The answers vary. For some, an underlying anxiety-related condition might add to the fear of public urination. For others, it may be a specific restroom-related instance that left behind overwhelming feelings of embarrassment, fear, or self-consciousness. And for the rest of us, it might be due to the overwhelming stigma around normal bodily functions.

Although it is often downplayed with the title “shy bladder syndrome”, paruresis is no joke. Going long periods of time without urinating regularly can lead to serious health complications such as urinary tract infections, weak pelvic floor muscles, or kidney stones. Not to mention the social anxiety that comes with fear of public urination. People with paruresis may have a change in behavior when the urge to pee strikes a little too far from home. Relationships with family and friends could be impacted if the condition is not addressed. Because of the stigma surrounding normal bodily functions, talking about such issues can be extremely nerve-racking and cause symptoms to remain for longer than needed. But there is no need to fear, the condition is highly treatable. If you or a family member is suffering from paruresis, seek medical attention immediately. Counseling is available to discuss what underlying issues or anxieties might be causing such fear of public urination. As for urinary tract infections, kidney stones, and other health complications, talk to your medical provider about getting on any medication needed for you.

Before I came to a conclusion regarding the pee shy crisis in schools, I took to the halls of DHS and asked some of my peers about their experiences. Aslyn Fannin, a senior and women’s restroom user, states that she experienced this phenomenon more when she was little, afraid of “people making fun of [her] peeing pattern”. But as she has grown older, she has taken on quite a bold way of preventing this fear from resurfacing. Aslyn openly discusses the possibility of discomfort that can be found in the restroom and by voicing these fears, she makes it easier for herself, and others, to pee with ease. When asked how we can handle this issue as a society, Aslyn said we need to “address the awkward so the awkward is less awkward.” I applaud Aslyn on her fearless actions and her successful attempt at lessening the effects of the pee shy epidemic here at Dover High, and I encourage other students to do the same.

So, how does pee shyness differ for a user of the men’s restroom? There is an obvious difference in that men typically urinate into a urinal instead of a toilet, allowing for what I can only imagine to be a more exposing experience. Aslyn also agrees that with so much on the line already, men have “worse things to worry about” than being pee shy. To get the answers I needed, I asked Brady Beckley about his experiences. Brady agreed that “men’s restrooms are more susceptible to pee shyness,” yet he does not experience it himself. He states that he is “not a terribly shy person”, contributing to the idea that sheer confidence might be the only solution to this issue. However, this may come easier for some than others. Multiple studies have been done to suggest that men may have greater self-confidence than women whether it is due to societal influence, genetics, or evolutionary reasoning. A Cosmopolitan article titled “The Annoying Reason Why Guys Have So Much Confidence” references a study by Wiebke Bleidorn, stating, “The team analyzed data from more than 985,000 men and women spanning 48 countries…They found that across the board, men have higher self-esteem than the female population.” This could explain why even though men are more exposed, they don’t seem to be as concerned about pee shyness as some women.

Brady’s advice to people suffering from pee shyness is to “slowly introduce yourself to the concept of not caring what others think,”  a motto I think should be applied to other areas of life, not just the bathroom. With so many issues in our world, humans don’t have time to be restless in the restroom. We should be less worried about whether or not someone else can hear our urine hitting the bowl and more worried that our ice caps are melting at an increasingly rapid pace. Peeing is a normal bodily function that every human experiences at least a couple of times a day. Honestly, we should be making fun of people who aren’t peeing regularly.

Pee shyness is an issue that has made its way into DHS for years, but it doesn’t have to be that way! If we all join together to create a safer restroom atmosphere, we can end the pee shy crisis at Dover High for good! So, the next time you walk up to a urinal or stall, try one of the suggested methods for peeing freely:

Embrace the awkward – Addressing an awkward silence may ease tension among restroom-goers.

Stop caring what others think – We all pee!

Be confident in who you are – Walk out of that stall with your head up high!